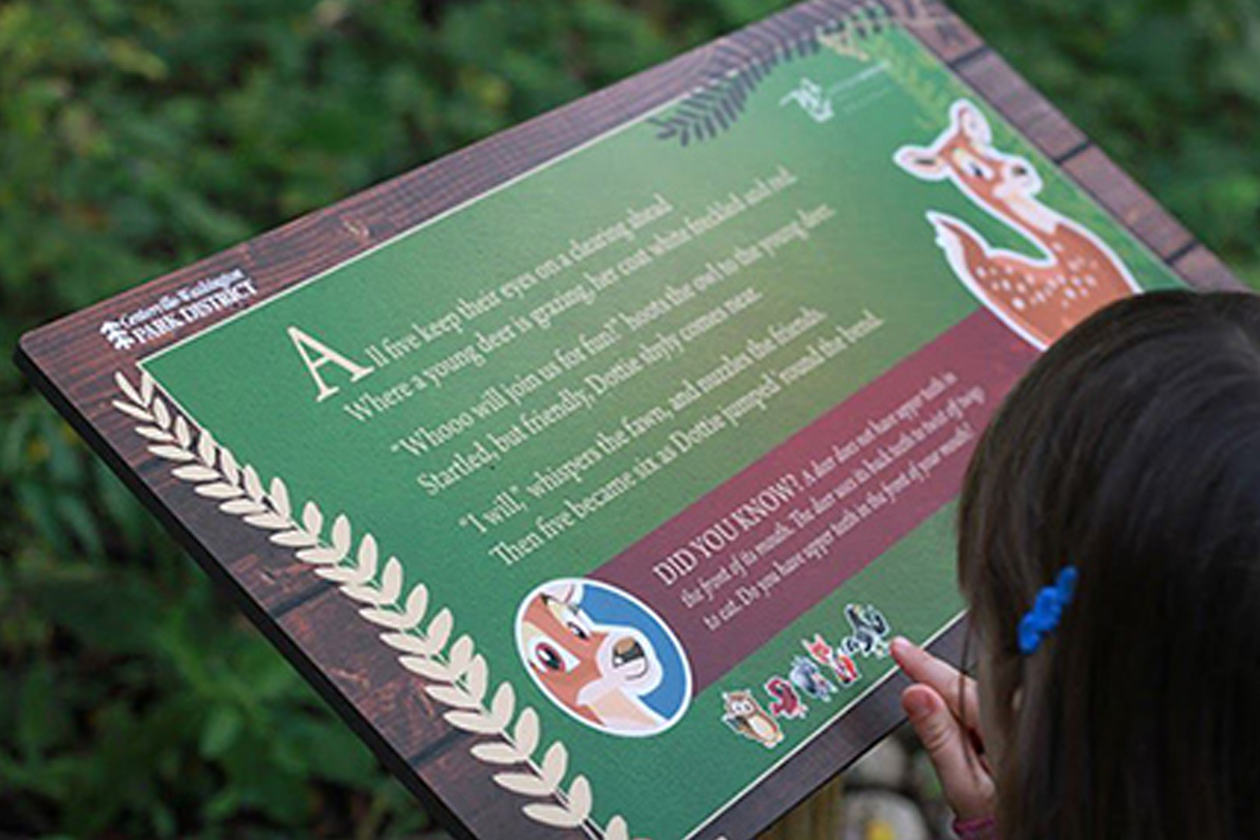 Combining exercise, nature and literature is what Owlexander’s Hoot Route is all about! Located in Centerville-Washington Park District in Ohio, Owlexander’s Hoot Route is the first nature and literature trail of its kind. This trail was a community effort between the park, the Washington-Centerville Public Library and is fully funded by the Yeck Family Foundation.

“We decided a nature literature trail – something that would bring together the love of nature and literature for young people – would be something new and exciting to add to our park district,” said Fitness Coordinator Jen Brandt. “When we approached our local library system about a partnership, they jumped at the idea.”

The idea was to design a storybook trail that exposes children ages 3-8 to both nature and literature. Each panel is designed to look and sound like a page from a storybook. The trail is the story of Owlexander, Centerville-Washington Park District’s mascot, meeting his woodland friends throughout the park. Each of the 13 different animals explains facts about themself, provides a fun riddle, or encourages children to participate in an engaging activity.

“Our hope is that the children will see some of these animals in their natural habitat as they are learning more about them,” said Brandt. “We had a park user call us shortly after the grand opening to say that while they were standing at the Pileated Woodpecker sign, they looked up and there was the Pileated Woodpecker!”

Some of Owlexander’s many friends he meets along the way are Betty the Butterfly,SubmitDottiethe Deer, Bill the Box Turtle and Chet the Chipmunk. Activities along the way include Cooper the Cooper’s Hawk who stands 20” from head to tail and asks the children, “How tall are you?” Kids can stand next to Cooper against a 5 foot cut-to-shape Pannier graphic panel to see how they measure up. Seth the Squirrel invites the young reader to “shake their bushy tail”, while Freddie the Frog welcomes kids to see how far then can jump. Freddie can jump up to 28”, or 20 times his body length.

The storybook panels are displayed on Pannier’s Fiberglass Embedded Panels throughout the park. Pannier also worked with the park to create custom cutouts of the different animals displayed though the trail. Pannier panels were perfect for the park, which is open year round, thanks to their superior durability and ability to withstand elements of weather and vandalism. Pannier also offers a 10-year warranty, live phone support, project management and follow-up.

“The staff at Pannier have been very easy to work with and their product is top-notch,” said Brandt. “Ordering is easy, the staff is friendly and professional, and our orders have been accurate. We have placed several orders with Pannier for our Park District and have consistently been impressed with the product. I highly recommend them!”