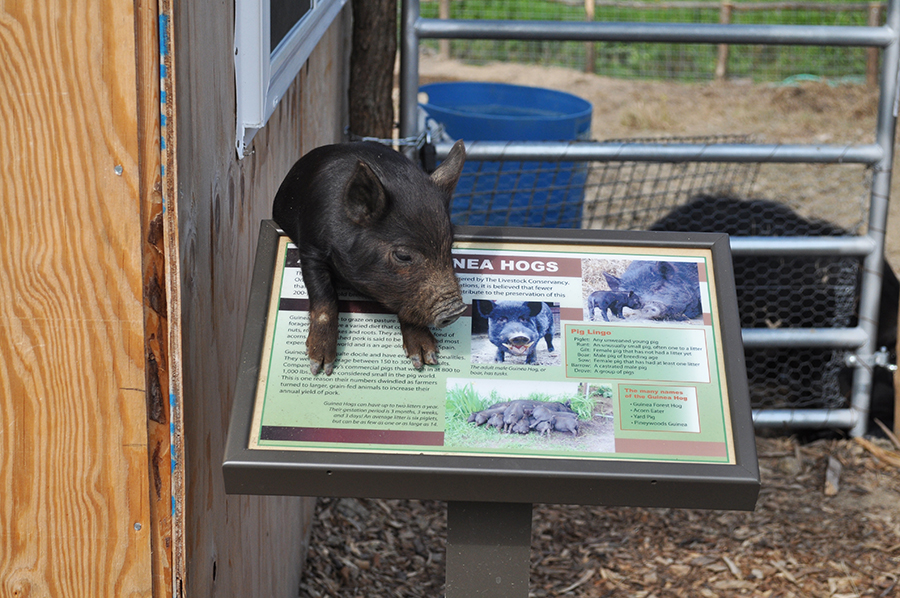 After a close race to the finish, Pannier is pleased to announce Alexis Faust from Taltree Arboretum as the winner of it’s Second Annual Photo Contest!

Alexis’s photo of a Single Pedestal style exhibit base with a Fiberglass Embedded panel displays information on the American Guinea Hog at the Taltree Arboretum in Valparaiso, IN. This piglet is enjoying reading the panel and learning about his family.

Carrie Dittman’s photo of a Double Pedestal style exhibit base was taken at the Seed Nursery at Bill Yeck Park in Centerville, Ohio. This photo features the main seed nursery sign, as well as seed nursery row signs in the background. The main sign explains the purpose of the seed nursery, which is used to help establish prairie gardens throughout Centerville-Washington Park District’s parks, and explains the many benefits of using native plants. The row signs allow visitors to identify each native species growing in the seed nursery.

In third place was Hannah Brodie’s Rail Mounted exhibit base photo. Located along the Brunswick Town Historic Site the wayside rests on a tour trail railing and looks out onto the Cape Fear River. Stately trees loom near and Spanish moss sways in and out of view. “Yankee Catchers and Infernal Machines” describes methods put into place by the Confederates to obstruct the Cape Fear river against steam driven warships. Brunswick Town is a major pre-Revolutionary port on North Carolina’s Cape Fear River. Brunswick was razed by British troops in 1776 and never rebuilt. During the Civil War, Fort Anderson was constructed atop the old village site, and served as part of the Cape Fear River defenses below Wilmington before the fall of the Confederacy. Colonial foundations dot the present-day tour trail, which crosses the earthworks of the Confederate fort.

“Once again we were extremely pleased with the participation in the photo contest,” said Pannier Graphics President Jeff Heddaeus. “Our customers are great and we love that they are as excited about their signs as we are when we fabricate them.”